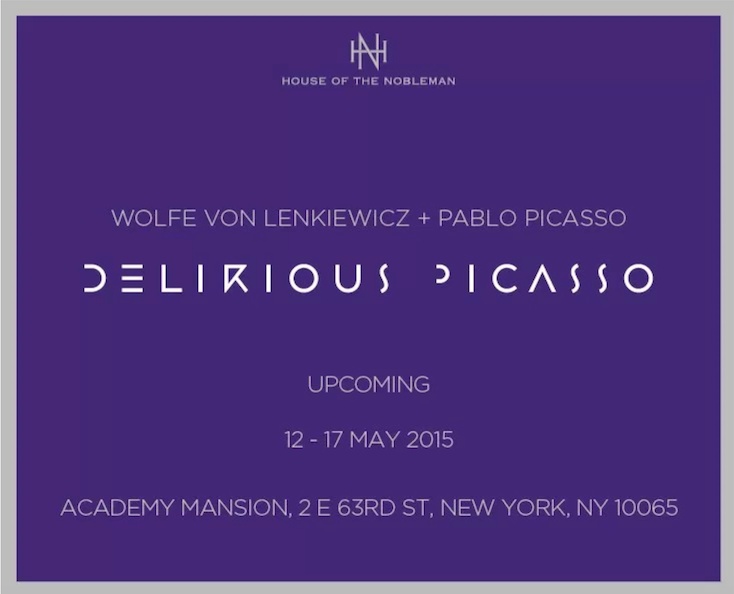 DELIRIOUS PICASSO is the first showing of works by the British artist Wolfe von Lenkiewicz in New York. Known for his reconfiguration of well-known art historical imagery and contemporary visual culture, his latest series of paintings juxtaposes Picasso's oeuvre with the art of ukiyo-e to create a surprisingly harmonious marriage between East and West through a dramatic and riotous explosion of colour and style. The artist employs the flat perspective, translates the medium of ink into the medium of oil, adopts the fine vigorous line and the sumptuous use of colour and intricate pattern exemplified by Japanese wood block printing.

Manifest is the work by Kuniyoshi Utagawa, one of the last great masters of ukiyo-e style woodblock prints and paintings as well as Kikugawa Eizan, the late follower of Utamaro, known for the most part for his depiction of beautiful women (bijing-ga). The contradictory qualities inherent in Lenkiewicz's reassembled paintings defy convention whereby the refined elements of the floating world imagery seamlessly merge with jaunty, syncopated rhythm and vitality of the figures that are synonymous with Picasso.

DELIRIOUS PICASSO comprises of 14 paintings that make up two distinct series of work entitled The Guards of the Void and the Giants. The 14 Picasso andKikugawa reconfigured paintings each measure three by two meters. Familiar Picasso motifs appear, particularly the musketeer smoking long clay pipes, unified with courtesan and samurai figures, as well as fabrics, flora and fauna inspired by Japanese ukiyo-e. The sheer scale of the paintings together with Lenkiewicz' deft handling of these two seemingly disparate aesthetics, form an arresting series of portraits that demonstrate the reconcilable nature of Eastern and Western aesthetics and especially the different Cubist and ukiyo-e approaches. It is almost as if the Japanese has invented a more controlled version of Cubism a century before Picasso.

What if Picasso had fully embraced the Japanese?

Although Picasso expressed an ambivalent attitude to the Japonism movement and famously quipped to Gertrude Stein that he had no taste for the art of Japan, it was recently discovered that he personally owned more than sixty erotic prints, (otherwise known as shunga). It is apparent that echoes of the Far East, and Japan in particular, were central to his artistic genesis as were the tribal arts of Africa and Oceania. Harold Bloom used the term 'The Anxiety of Influence' to describe the artist who wishes to cast himself as a genius of a radical novelty by claiming no debt to past giants.

One historian described Picasso's arrival on the Parisian art scene as that of 'a vertical invader', a sudden bolt of absolute novelty. The reputation for radicalism was an identity he gave himself and continued to perform for the rest of his artistic career. There are many overtures between Picasso and America, America and Japan, the East and the West that informs Picasso's work. Picasso's 'invasion' of America celebrated the 'New Spirit' with the spectacular Ballet Russes production Parade in Chicago (1917) and included performers wearing cardboard skyscrapers, playful new symbols denoting ambition, success and sex. The Beaux Arts Ball in New York(1931) subsequently featured architects wearing iconic skyscrapers costumes while giddily sipping champagne.

The title DELIRIOUS PICASSO refers to Delirious New York, a book by the architect Rem Koolhas (1978) that has today attained mythic status. A celebration and analysis of New York, it refers to Manhattan as "the 20th century's Rosetta Stone" and reinterprets the relationship between architecture and culture, the development of the skyscraper and Manhattan as a laboratory for invention and testing of a metropolitan lifestyle or 'the culture of congestion'.

Academy Mansion, built around the same time as the Surrealist movement and the Ballet Russes is situated amidst the high-rise skyscrapers of Manhattan. Its patron, William Ziegler, sought a more peaceful idyll in the heart of the city than the new tall buildings could afford him. With this in mind his architect Frederick Sterner seems to have looked to the Japanese, designing a structure that is noticeably low-built, with an intended top floor that shields the occupants from public view. Furthermore, the mansion is housed around a central courtyard, a fundamental feature of Japanese architecture.

Von Lenkiewicz, currently showing at Deichtorhallen, Hamburg, as part of PICASSO IN CONTEMPORARY ART, a large-scale group show featuring more then 90 artists referencing Picasso in their work, embodies the notion of the artist in dialogue with and borrowing from the work of another artist. I a similar, spirit, DELIRIOUS PICASSO seeks to further develop a dialogue between now, the past and future. Included in the exhibition are several works by Picasso and contemporary artists influenced by Picasso such as Richard Prince and Roy Lichtenstein, providing the maxim that creativity cannot exist without in the past. It is through re-arranging and corrupting the familiar that von Lenkiewicz re-invigorates the icons of the past. The act of appropriation is provocative and demonstrates the infinite possibilities that exist within the world of art that continue to be the central images of our time.

As befits the title, The Giants by Wolfe von Lenkiewicz abounds with familiar figures from Picasso's oeuvre, inextricably interlinked with fierce samurai and exploding on a monumental scale in five adjoining paintings measuring 3 m x 10 m across. Inspired by Kuniyoshi Utagawa's most celebrated battle triptych, 'Fight to the Death of Heroic Samurai of the Kusonoki Clan at Shijo Nawate', 1851.

"According to the Chronicle of the Great Peace in, 1348, General Kusonoki Masatsura led 3,000 troops from the Southern Court in battle against 60,000 Northern Court soldiers at Shijo-Nawate in Kawachi Province. Vastly outnumbered, the Southern Court had no chance of winning, and in the end, Mattsatsura and his brother Masatoki killed each other while their soldiers fought to the death."

In 1860, the first delegation by the Japanese Embassy included 70 Samurai, who arrived in New York and became a celebrated parade and encounter between the two nations. Lenkiewicz's series, The Giants, is partly a metaphor for the samurai spectacle that dazzled New Yorkers. The two distant nations exerted considerable influence on each other in the 19th and 20th centuries both culturally and as trading nations. This historical event overlays with the date of Utagawa's 1861  battle triptych that acts as another metaphor for the various transgressions, influences, ebbs and flows that were  simultaneously taking place from East and West, and again from West to East. The genius loci of the up-and-coming Delirious Picasso exhibition in the setting of New York City celebrates both the glory of Manhattan and 250 years of East West encounters.

In Lenkiewicz's version, Kuniyoshi Utagawa's mythical battle is synthesized with Picasso's leitmotifs and in particular his Guernica painting. Recognizable are Buste de femme, 1962, in panel, one, Young Boy with a lobster, 1941, in panel two. Panels three and four integrate elements from the 1961 lithograph series Imaginary Portraits and the fifth panel depicts Picasso's Musketeer with Pipe, 1967. Certain affinities between Guernica and the Giants become apparent with regards to the subject matter and dynamic movement inherent in both paintings. Importantly, the deliberate act of employing the mask, almost as a form of cultural contraband, can be seen in both Lenkiewicz's and Picasso's work, respectively the Japanese and the African.

Each of the fiver figures are set against the deep saturated caput mortum or Egyptian umber background that brings to mind notions of Buddhist temples, as well as themes of Death and the afterlife. The significance of the cardinal purple colour that proliferate in the first panel and are also reminiscent of the Japanese ink stamps and signatures found throughout each panel.

The collision of eastern and western styles, traditions and mediums creates a surprising marriage of harmony between cultured, a violence of clashing forms charging forth in wicked pictorial joyfulness; a paradox between restraint and grandeur in a flourish of paint, style, expression and colour; a ribald costume drama. The depiction of samurai in battle with the hundreds of arrows darting in every direction coupled with the spontaneity and dynamism of figures from Picasso's pictorial universe lends a powerful physical immediacy to the painting. Lenkiewicz's interpretation provokes a paradigmatic shift in how we can view painting anew in its endless possibilities.